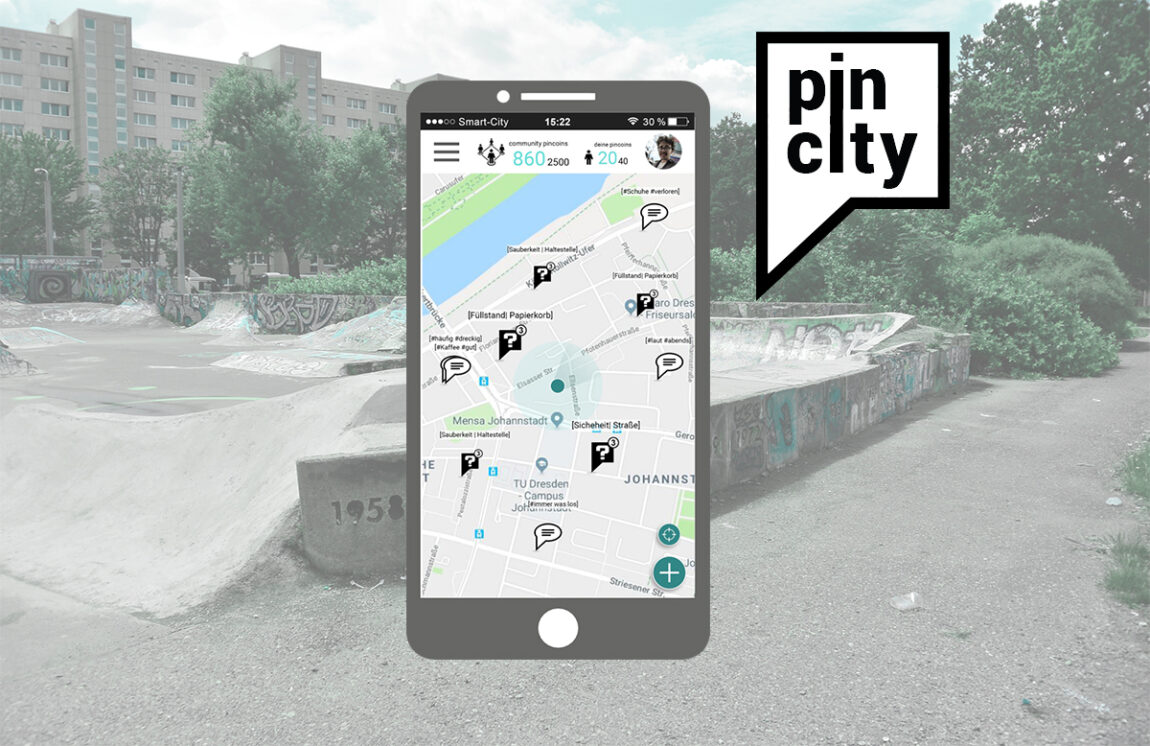 A vision takes form: At half-time of the smart city project Data4City, the PinCity app is ready for beta testing

A little over a year has passed now since IT specialists of Spectos GmbH and scientific staff of the WISSENSARCHITEKTUR LABORATORY OF KNOWLEDGE ARCHITECTURE of the TU Dresden have joined forces for the innovation project Data4City. This research project is subsidized by the ESF (The European Social Fund in Germany). We approached the scientific coordinator of the project, David Hick, for an interview on the project’s current status and the progression of the PinCity app.

Spectos: It is nearly half-time for the project. What is the vision of Data4City, what has become of it?

D.H.: With our background in architecture, the idea for Data4City emerged from the approach of agile urban planning. How can cities become more flexible in social structures and in construction planning? Based on the new approach of data-driven business models, our vision of an information network between citizens and for cities has developed. How can citizens’ needs be identified and what can cities and municipalities do to overcome existing problems? We have noticed that there are now many participatory projects. However, these are always very complex and require an active approach.

Spectos: How has the project evolved?

D.H.: After a long orientation phase and intensive discussions with various stakeholders we came to the consensus to develop an interactive app. This will be tested in the coming weeks in the beta version. For this we are looking for beta testers in Dresden to give us feedback on the app. The aim is for citizens to leave geolocal information on various locations such as supermarkets, bus stops, playgrounds and other relevant topics in their district and to answer other citizens’ questions on specific issues at specific locations. In addition, the collected data is to be analysed according to various criteria in order to derive appropriate development measures. One can imagine the system as a kind of chatbot which scans the environment qualitatively by targeted and undirected questions.

Spectos: There are many ongoing smart city projects. Is Data4City simply another project or what differentiates it from other innovation initiatives?

D.H.: An important topic at present is participatory urban development. What can be done to actively involve residents in urban development? In the course of our research project, the concept of “indirect participation” has gradually developed. This is based on the thesis that there are many citizens who are interested in their neighborhood, but have neither the time nor the motivation to become actively involved.

Most existing smart city projects collect quantitative data based on sensors measuring air temperature, pollution, noise levels and so on. What distinguishes Data4City is that, to our knowledge, it is the only project that continuously collects qualitative data. Each neighborhood has its own topics and issues with which to improve the quality of life. The app will make it possible to gather qualitative local data in a targeted and sustainable way. Rather than conducting complicated and selective citizen surveys every 2 years, the app will allow data to be collected continuously and at any time. Processed and visualized in a city planning dashboard, this real-time data can be used, for example, as a consulting basis for city planners. In the medium term, this can even serve as a direct channel between the city and residents, e.g. to initiate timely actions such as municipal waste collection campaigns.

D.H.: Coming up with a suitable name turned out to be an intensive process with external and internal partners. There were many ideas. The name should convey the capabilities of the app, but at the same time not reveal too much. The term “pinning” refers to a pin board on which ideas and thoughts are collected. This is exactly what PinCity enables in a collaborative way and location-based: Ideas, questions and suggestions are left on a digital map of the district and released for debate.

Spectos: Thank you for the interview. We are looking forward to further updates of the PinCity app!

P.S.: Are you interested in testing the PinCity app? Just send an e-mail to David Hick with the subject “Beta-Test PinCity App” or use our contact form.

Our experts look forward to your inquiry.